What if the thing you most longed for was resting on a two week wait?

After a health scare, Brighton-based Lou is forced to confront the fact that her time to have a baby is running out. She can’t imagine a future without children, but it seems her partner doesn’t feel the same way, and she’s not sure whether she could go it alone.

Meanwhile, up in Yorkshire, Cath is longing to start a family with her husband, Rich. No one would be happier to have a child than Rich, but Cath is infertile.

Could these strangers help one another out?

Combining Sarah Rayner’s deft exploration of raw emotions with the joy and resilience of friendship, The Two Week Wait is a memorable, moving page-turner about two very different women, each yearning to create a family of her own.

Sarah tells the story behind the novel

For many years, alongside being an author, I worked as an advertising copywriter. Often I had to direct my creative energies into promoting pretty mundane products – butter, ballpoint pens and banks, for instance. But one day shortly after the publication of One Moment, One Morning I was invited to work on something more unusual: to write the copy for the website of a fertility clinic. 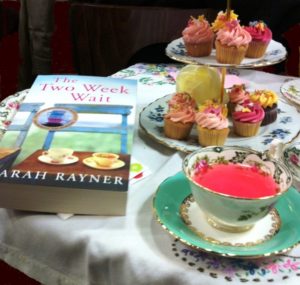 Soon I was immersed in patient case histories and I found myself incredibly moved by the stories I read. I learned that egg donation had given women who otherwise could not have had children the chance to do so. What an honour that is, I thought – what greater gift to another person? I’d assumed all those using donor eggs would be older women, who had left having children until it was too late to use their own eggs, but instead I learned egg donation often gives hope to younger women who’ve been left infertile as a result of treatment for cancer, or who’ve suffered a premature menopause.

I also learned that a high percentage of the women donating eggs were gay, and were doing it to subsidize their own IVF treatment. I was in an open plan office at the time, and the subject sparked a heated debate: would a child you’d carried, but which was not genetically yours, feel like your baby? How would you feel during pregnancy, and after? Did gay couples have the ‘right’ to have children? It was at this point one of my colleagues, who’d just finished reading One Moment, One Morning, muttered something about it being a great subject for a novel, and I shrieked, ‘Woah! Hold that thought!’

My colleague had sown the seed of something. I became increasingly keen to delve deeper into the subject than writing the website allowed. I also realised that Lou, one of my characters from One Moment, One Morning, was at the point at the end of that novel when she might be starting to think about having children, and, being gay, she might well go through a fertility clinic to help make this happen…

Although I’ve not had IVF myself, I wanted to be sure I’d got the details right. So in addition to the research I’d already undertaken copywriting, I talked to a number of couples – both gay and straight – who’d been through a tough time trying to conceive. Some had been lucky and gone on to have a family. Others had not. And as I tapped away on my computer, their experiences echoed in my ears, so I felt many of emotions my two characters go through alongside them.

‘A topical subject treated with sensitivity, insight and care that makes for a wholly absorbing story… will prompt a tear or two.’ Easy Living
BUY DIRECT
BUY FROM AMAZON